Hi everyone and welcome back to Happy Hour.歡迎你回到酒館.It's going to be our own 七夕 festival or double 7th festival this weekend.轉眼又到七夕，in all of these lover related holidays in the past Chinese or western we have already done a few episodes, for example，we have done romantic love stories，romantic love quotes，we have done，tragic love stories even anti-love stories. 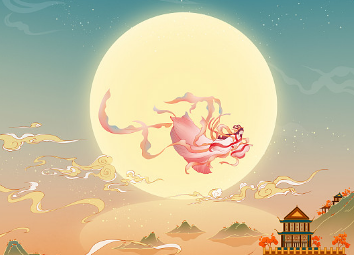 So when you guys were busy thinking about gift ideas，I've been trying to come up with a relevant topic; and then it dawned on me, although you see 七夕 related advertising everywhere, few people would actually dig deeper into the legend of love. I'm sure most of you would recognize Cupid，but if I ask you who are the gods and goddesses of love in our own legend and folklore，I'm sure many of you would be shaking your heads. 比起西方神話里家喻戶曉的丘比特，如果問到中國愛神，想起很多人就有點兒摸不著頭腦了。

And for those of you who got to know me throughout the years, you know that one of my biggest interests is folklore and mythology. So in today's special 七夕 episode，let me introduce you to some of our own gods and goddesses of love.今天的七夕特輯里，璐璐就帶你認識一下我們自己的那些愛神，and interesting yet sometimes bizarre stories relating to them.

First of all，let's start with the story of 七夕 itself. I'm sure most of you know the story behind 七夕，there are two main characters，牛郎and織女. In English, they are often called the cowherd and the weaver girl.

如果你聽到牛郎，首先腦子里面想到的是hostel，那就建議你和璐璐一樣去面壁思過一下，go back to the topic, cowherd and a weaver girl. Cowherd was a poor farmer boy，and the weaver girl was from the heaven. And they fell madly in love and got together like any other star-crossed lovers，and of course the emperor of heaven or the Jade Emperor玉皇大帝found out about this, and was furious.

So he got the weaver girl back to heaven when the heart broken cowherd decided to chase after her, the Queen Mother of The West西王母 drew a silver river in the sky and blocked his way. But then because their love was so great，the magpies decided to form a bridge over the silver river for them to meet. In the end, even a jade emperor was moved. So he allowed this couple to meet on the magpie bridge once a year on the 7th day of the 7th month according to the Chinese calendar.

And this was the origin of the 七夕 festival. And since thousands of years ago in the Han Dynasty，the tale of the cowherd and the weaver girl had already been celebrated.

And on this day，girls would go to local temples to pray to the weaver girl for wisdom，especially skills in needle work，which symbolize the traditional talents of a good wife.古代的七夕少女們會向織女祈求至巧，特別是做針線活這種心靈手巧的手藝，以求能靠手藝符合如意郎君。So七夕was also called“乞巧festival”，which literally means praying for wisdom and dexterity. On that day，girls would also dress up and make wishes for marrying someone who would be a good and loving husband.

Well, the first one might come as a surprise. She is the mother goddess of Chinese mythology，這就是中國神話譜系里的母神-女媧。According to Chinese mythology，she is credited with creating humanity and repairing the pillar of heaven.大部分人對于女媧的了解多半是女媧補天捏土造人這些傳說.And few people realize that she was also one of the very first goddess of love and marriage.

So the legend has it女媧was born three months after her brother伏羲and later on she took 伏羲 as her husband. Before you think it's weird, this type of arrangement seems quite common in many of the ancient mythologies around the world. And because of this marriage to 伏羲，女媧 is credited with inventing the idea of marriage.因為女媧和伏羲之間的結合，她也被視為是中國第一位愛神，因為她創建了婚姻制度，which allows men and women to get together and procreate.

The second widely celebrated goddess of love is also Chinese goddess of the moon.中國傳說里第二位傳統的愛神也是月神，又叫月光娘娘、太陰星主、月姑、月光菩薩，depending on your own local preferences.

And before you ask，yes, usually嫦娥is seen as the goddess of the moon. There are many versions of her legends，but they all include some of the key elements: 后羿，the archer; and elixir of life; and the moon. 嫦娥奔月有很多不同的版本，but in the most popular versions，she took her husband's elixir of life, 她吃了丈夫后羿的仙丹, and then flew to the moon，becoming the goddess of the moon. It sounds like a pretty tragic story of separation.

But for some reason，I guess it's the romantic notion of the moonlight, the goddess of the moon is often connected to the idea of romantic love. Ever since ancient times，Chinese couples have been exchanging sweet nothings and making commitment in the moonlight.

月神其實是一種非常常見的民間信仰，中國的古代男女熱戀時也會時常在月下盟誓定情拜禱月神.Lovers that are apart from each other also would pray to the goddess of moon for their reunion，可謂但愿人長久，千里共嬋娟。

If you don't like the moon goddess，how about an old man under the moon？如果你不喜歡月光娘娘，我們還有月下老人。He is a god or to be more precise, he is an immortal representing marriage and love in Chinese mythology.月下老人嚴格意義上來說不是god，而是immortal神仙.He appears at night and ties all predestined couples with a red sulking thread.他會把上天注定要在一起的戀人，用一根凡人看不到的紅絲線綁在一起，after which nothing can prevent their union.

One of the earliest written laws about 月老 was in the Tang Dynasty. So this is the story: There was a young man named 韋固, once he was passing the city of 宋城 where he saw an old man leaning on his pack，reading a book in the moonlight. Amazed,韋固 walked up to him and asked what he was doing?

The old man answered: I'm reading a book of marriage listing for who is going to marry whom. In my pack, I have read threads for tying the feet of husband and wife. 韋固 was intrigued.

The old man took 韋固 to a marketplace where they saw a blind old beggar woman carrying a 3 year old little girl in her arms.

So the old man said to 韋固, in 14 years，this little girl will grow up to be your wife.韋固 was furious. He shouted how can I possibly marry this lowly beggar girl？But the old man said since you are predestined you can't fight fate. Although 韋固 didn’t fully believe this old man, just to be on the safe side，he sent his servant to stab the little girl with a knife. His logic was if I killed this little girl，then there will be no chance of her growing up to be my wife.

However his servant missed and only managed to leave a scar on the girl's forehead.14 years later，a local official gave 韋固 his daughter in marriage, and after they got married,韋固 found out although this girl was beautiful，she had a very visible scar on her forehead and it turned out that was the little beggar girl who was later adopted by the official. And it turns out he can't fight fate after all.

聽到這個故事的全貌，璐璐真的忍不住吐槽 how on earth is this a romantic story, so this man wanted to marry someone rich，decided to kill his predestined wife when she was only a 3-year-old child. Later on this baby killer ended up marrying her anyway and they lived happily ever after, are you being serious？I wish I understand the logic in that.

But whether you like the story or not，the whole idea of predestined match was kind of a rebellion against the traditional idea of matching family backgrounds.雖然故事是充滿槽點，但月老傳說里這種前世注定今世緣的認知態度，可以說是對一味講究門當戶對的觀念，算是一種反叛和進步。

另一對保佑美滿姻緣的神仙就是“合和二仙”,they are usually depicted as two little boys, one holding a lotus flower，舉一荷花的荷，the other holding a box，舉一盒子的盒。They were originally two monks living a secluded life.據說這兩位本來是肉身凡胎的僧侶，一位叫寒山，一位叫拾得.

As immortals, they are usually associated with harmony and happiness，both in marriage and in friendship.

So far all of these gods goddesses immortal that we've talked about are to bless the union between a man and a woman.

But do you know that in Chinese folklore，there was actually a folk god blessing the union between two men.之前我們提到的都是保佑男女姻緣夫婦和美的神和仙，但可能很少有人知道在中國的傳說里有一個小眾的民間神，他所保佑的卻是另一種姻緣.

This is 兔兒神，sometimes called the Leveret Spirit, the Leveret is a baby bunny. I need to remind you here 兔兒神 is completely different from 兔爺, so don't get those confused. Well, the Leveret Spirit or the Leveret of God is a folk god that manages love and relationship between homosexual people，especially gay men. The original folklore was documented in a book called What the Master Would Not Discuss.他的故事在清朝袁枚的《子不語》里就有記載.

So back in 17th century福建，a man named胡天保 was in love with a young official, and he followed him around and try to spy on him to see him naked. And when he was caught，he confessed his love to this official. The official was furious and had 胡天保 tortured and killed. But then he returned from death in a form of a baby bunny. In the dream of a village elder，he demands local men build a temple to him where they can pray and burn incense in the interests of affairs between men.傳說中因為自己不一樣的取向而死去的胡天保，此后變成了兔兒神專司同志戀情。

Now this folklore was mainly in southern China in areas around 福建.

Nowadays in pop culture，you might see them in certain stories or games. So that ends today's stories about some of the interesting gods, goddesses, immortals, and spirits relating to love relationship and marriage in Chinese folklore.

Have you heard of any other stories? Leave your comments in the comment section，we would love to know more stories from you. Happy 七夕 everyone. See you next time.