JUDY WOODRUFF: A catastrophic fire in Northern California is still spreading tonight. It already engulfed one entire town as it burns into the record books. Amna Nawaz has our report.

AMNA NAWAZ: After swelling 110 square miles in a single day, California's Dixie Fire is now the largest anywhere in the country, fueled by hot weather and gusty conditions. As of this morning, the blaze also ranked as the third biggest in state history, stretching across 676 square miles in Northern California. Greenville, a small, historic gold rush town, is already gone, consumed by flames Wednesday night. Congressman Doug LaMalfa represents the district.

REP. DOUG LAMALFA (R-CA): We lost Greenville tonight. And there's just not words for how us in government haven't been able to get the job done. 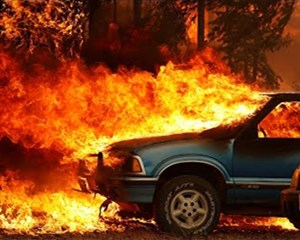 TODD JOHNS, Plumas County, California, Sheriff: My heart is crushed by what has occurred there. And to the folks that have lost residences and businesses, I have met some of them already. Their life is now forever changed, and all I can tell you is, I'm sorry.

AMNA NAWAZ: Johns estimates more than 100 homes were destroyed, though there's no official accounting yet. The fire's impact also reaches far beyond the state. In Reno, Nevada, this morning, what appear to be snowflakes, actually ash, blowing in from more than 100 miles away. The Dixie Fire is now into its fourth week. The cause is under investigation. But Pacific Gas & Electric says it suspects a fallen tree on one of its power lines. The fire is so far just 35 percent contained. Better weather conditions this weekend could help firefighters battling to save what they can, while others reflect on what was lost. For the "PBS NewsHour," I'm Amna Nawaz.